⚠️ Content Warning: This article contains mentions of adult topics that may not be appropriate for younger readers.

There are millions of communities on Discord with varying interests and diversities. As such, there might be a desire for some servers to be able to integrate adult content as part of their community discussions. This would be the kind of content that is suitable for some people based on age restriction yet unsuitable for others. Channels for this content can provide an important space for adults in your server to discuss issues related to topics such as sexual health, safe sex, their relationships with their bodies, or a space to share and explore adult content. Adult content in any medium cannot be shared on Discord outside of channels that have been marked with the NSFW toggle. Maintaining such a space in any community does require a significant amount of oversight, effort, and proactive zeal from any given moderation team. As such, keep in mind that choosing to create this space is purely optional and most communities are free to decide whether having such a space is suitable for the culture and if it fits within the context of their community. This article will cover what falls under the umbrella of adult content, what it means, when and where it is allowed, how to maintain a space for it, and how to successfully set up and moderate such a space in compliance with Discord’s Terms of Service and Community Guidelines.

Adult content is anything that would be unsuitable for those under the age of 18 to view. This is synonymous with the term “NSFW” for the purposes of this article. NSFW is an acronym for the statement “not safe for work”, which is used as a shorthand to clearly indicate to others that a certain type of content may not be appropriate to look at in public, professional or controlled environments.

For Parents, Guardians and Educators

Please feel free to browse more on how Discord tackles safety on its platform in this section of the website. Check out our Safety Portal, particularly in the Parents and Educators section for further guidance.

The first step to setting up an adult content channel is to determine what method of age gating you need and how you want to set it up. People who should not have access to the content will try to get in and what steps you take to keep them out is up to you. Please note, since things like server icons, invite splashes, server banners, user profile pictures, usernames, nicknames, and custom statuses cannot be age gated, they should not contain any adult content. Emojis containing adult content should only be hosted and posted in places that are age gated.

Discord only requires that you use the NSFW toggle, but depending on your server and the nature of the content shared, you may want to take a more active approach to ensuring the content is only accessed by adults.

The NSFW toggle must be turned on for any channels with NSFW content. Even if your server is exclusively 18+ and requires users to send a picture of their photo ID to join, the channel still needs this toggled on. In addition to keeping minors out of spaces with adult content, this toggle will also flag the channel as NSFW so that adult users can avoid it if they do not wish to see that content. Not marking NSFW channels appropriately opens the risk of action being taken on the server from Discord’s Trust and Safety Team.

Discord asks all users to submit their birthday upon account creation and has been asking users whose accounts were made prior to its rollout to provide their birthday upon attempting to open an NSFW channel. This will prevent users who have told Discord that they are under the age of 18 from seeing any content in the channel, they will instead be met with a page telling them that they are not old enough to view the channel.

If you run a server with NSFW content, you may want to consider preventing users from just joining and immediately opening NSFW channels. Whether you want to do this or not depends on you and what your channels are for.

If your main concern is to do your due diligence to abide by the Terms of Service and Community Guidelines for a server with some image only channels, you may not want to gate your server entirely. If your main concern is keeping your younger members safe from engaging in inappropriate discussions and your adult members safe from unknowingly interacting with minors in an inappropriate way, then you might want to set up additional levels of security to keep out any minors who may have given the incorrect age when prompted by Discord’s age gate.

This can be achieved by asking users how old they are as part of your onboarding process. Perhaps a user must supply their age in their introduction or through picking a role from a bot. Users who aren’t aware that there is NSFW content in your server that they may later want access to are less likely to pretend to be over 18 immediately upon joining.

It should be noted that this is less effective if your server is named something that makes it obvious that the server contains 18+ content because users who join will likely know that they will need to lie to access it.

If your server has certain channels designated for adult content and the server has minors in it that are there to access age appropriate content that’s also hosted in the server, it may be worth role locking the adult content channels.

This can be implemented by making it so that @everyone, a role all members have, or an under 18 role, is unable to see the channel. The main ways to do this would be to set the default permissions for the channel to neutral and set another role to deny access, or set the default user permissions to deny access and the over 18 role to grant access. This also allows you to later remove access to adult content from any users that are causing problems in the channel by simply removing the role that grants them access.

There are various ways that role permissions can be set up to prevent access to a channel. This is only an example, and is not the only option, and may not be the best option to go along with your overall server permissions setup.

Channel role gating can also allow you an extra opportunity to read the rules for or regarding the adult content channels. This can be accomplished by asking users to react to a message within the rules, dm a secret phrase in the rules to a bot that assigns a role, ask a staff member directly for the role and have that staff member ask the user to confirm they’ve read the rules before assigning it, or a number of other systems.

When users open the channel in question, they will see the channel name and see the popup in the screenshot below. Most users will probably not read any channel rules or channel description beyond this. It is important to clearly state what the channel is for in the channel name to prevent users from just assuming it’s a general media channel based on Discord’s popup and the channel name. 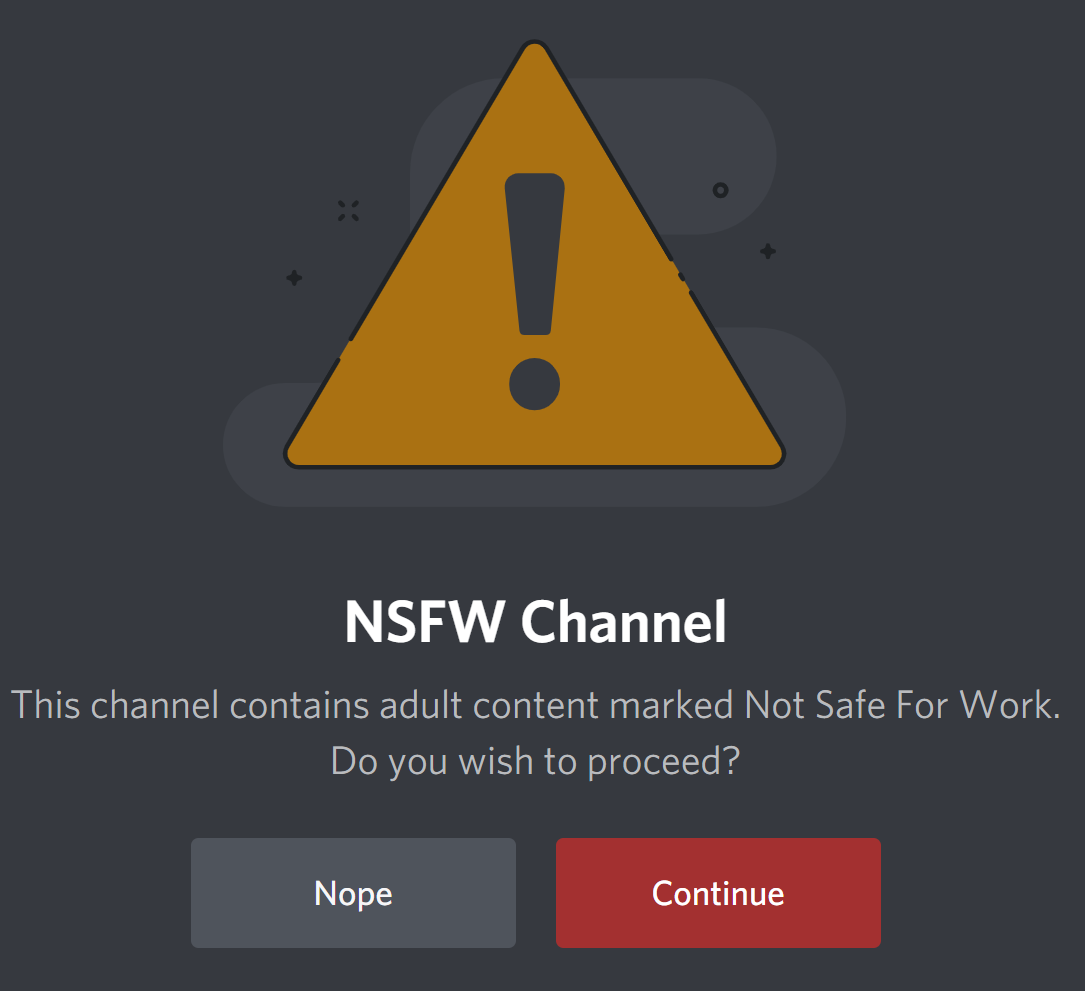 Channels focused on adult topics can provide users with a comfortable space to discuss personal issues and build closeness and trust between members of your community, or just be a space to blow off steam and share content they enjoy. These channels also have very specific risks and required mitigation strategies that will vary depending on the nature of the specific channel.

If you are running a channel on safe sex advice, your main concern will likely be the spread of misinformation and it will be of paramount importance to have reliable and accurate resources on hand. If you run a channel for sharing images, your main concern will likely be making sure that the images shared are legal and properly categorized into your channel. You have to consider what the specific risks in your channel are and ensure that you are writing policies that are specific to your needs and finding moderators that are knowledgeable and comfortable with those topics.